On September 11, 2011, my food truck buddies and I journeyed once again to the Oviedo Mall for another Food Truck Bazaar.  Little did we know this would be the last one put on by The Daily City at the Oviedo Mall; the monthly Oviedo Bazaar has moved to the Lowe's parking lot (which is not far from the mall).
In honor of 9/11, there was a firetruck there on display, and I thought this was a really cool touch.  Just a nice way to honor and remember this important date.
Much like last time, our group had a tent set up, as well as some camping chairs, and we were ready to eat! 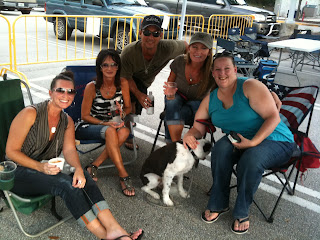 My first truck of choice was a truck that had come in from Tampa called Wicked Wiches.  Since I previously have lived in the Tampa Bay area, I have a soft spot for food trucks that come from there.  But what's even more awesome is that I was recently made aware that Wicked Wiches will be on Eat St, a show on the Cooking Channel about food trucks and other street food.
The menu at Wicked Wiches is extremely varied.  They had items like a Monte Cristo, Turdunken Smashballs, and Ratitouli.  However, once I saw that they had a bacon cheeseburger eggroll, I knew that's what I'd be ordering.
The bacon cheeseburger eggroll was ground beef, cheese, and bacon wrapped in an eggroll wrapper and deep fried, just like any other eggroll.  It was served in a hot dog bun (I'm guessing to make it easier to eat), and came with ketchup and yellow mustard on top.  Served with it on the side were Sweet Potato Chips.  This item was divine.  I have previously posted a recipe on this blog for cheesesteak eggrolls.  This item was a lot like those, except using ground beef, and had the addition of bacon.  And frankly, who doesn't love bacon?  I ended up eating the second half without the bun, because I didn't need all that extra breading.  The chips were really good, and had a caramel type drizzle over them.
The next truck I visited was the Yum Yum Truck.  Now, I've talked about them before on the last Bazaar, but they had a new item this time that I want to mention.  Cake Poppers.  Basically, cake balls on a stick, covered in Peterbrooke Chocolatier chocolate.  I don't need to say anymore (but I will!).  These little delights were melt-in-your-mouth fantastic.  I chose to get the red velvet cake pops covered in dark chocolate.  Simply delightful. 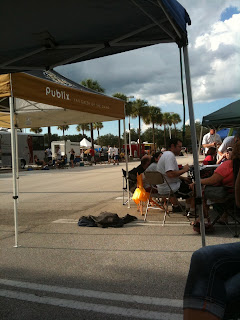 My next stop was the Gastro Truck, while I had just eaten at it two days earlier, and there were plenty of trucks I hadn't tried yet, I could not get their Mac & Cheese off my mind.  I didn't get to have it on my first visit, but was determined to have it on this trip.  I ordered a full order of this cheesy, delectable, pasta. It was worth the wait.  The bake their Mac & Cheese so it gets those great bubbly browned bits that I absolutely adore.  I will be eating it again.  One of my Food Truck Bazaar companions ordered the Apple Harvest sandwich.  She said it was incredibly good, and it definitely looked that way.  I still need to order their Pork Belly Grilled Cheese!  She also had their flavored tea of the day, and enjoyed it.
Speaking of macaroni and cheese, one of my foodie friends purchased some mac and cheese from Mama's Fixins and deemed it to be scrumptious.
The only male who made it out with us this time rounded up a bunch of items.  He ordered a fish taco from Winter Park Fish Co., a variety platter from C&S Brisket Bus, and a bruschetta grilled cheese (but I forgot where it was from!!!).   I tried the bruschetta grilled cheese, and I think that the fresh light tomatoes really complimented the grilled cheese.
My last stop at this particular event was at the Batter Bowl Truck.  This is a dessert truck, and I was able to get these AMAZING push-up cake pops.  Their chocolate cake push-up pop with peanut butter icing was the best dessert I've had in a LONG time.  I also got a red velvet push-up pop that had cream cheese icing, and that was enjoyable as well.
This food truck event was a great one.  It didn't rain, I was able to try a lot of items, and the only line I really waited in was at the Gastro Truck.  And it turns out, one of the chefs suffered heat exhaustion and couldn't work, and that was why the food took longer than expected.  Hopefully the poor thing is recovered.
I cannot wait for our next journey to a Food Truck Bazaar.  Good friends, lost of good food, and (hopefully) cooler weather is a recipe for a great day.  Make sure you check out your local food trucks, and food truck events.  Believe me, it's worth it!
Posted by Melissa NRFD

Melissa NRFD
Orlando, FL, United States
I AM A 40 YEAR OLD FOODIE WHO IS MARRIED WITH 3 FUR BABIES (2 CATS, 1 PUP). I WORK FULL TIME AND AM PURSUING MY BACHELOR'S DEGREE IN APPLIED SCIENCE PART TIME. I LIVE IN THE METRO ORLANDO AREA. I WANT TO SHARE MY RECIPES,WHICH VARY FROM COMFORT FOOD TO MODERN CUISINE, ALWAYS WITH HELPFUL HINTS I HAVE LEARNED ALONG THE WAY! 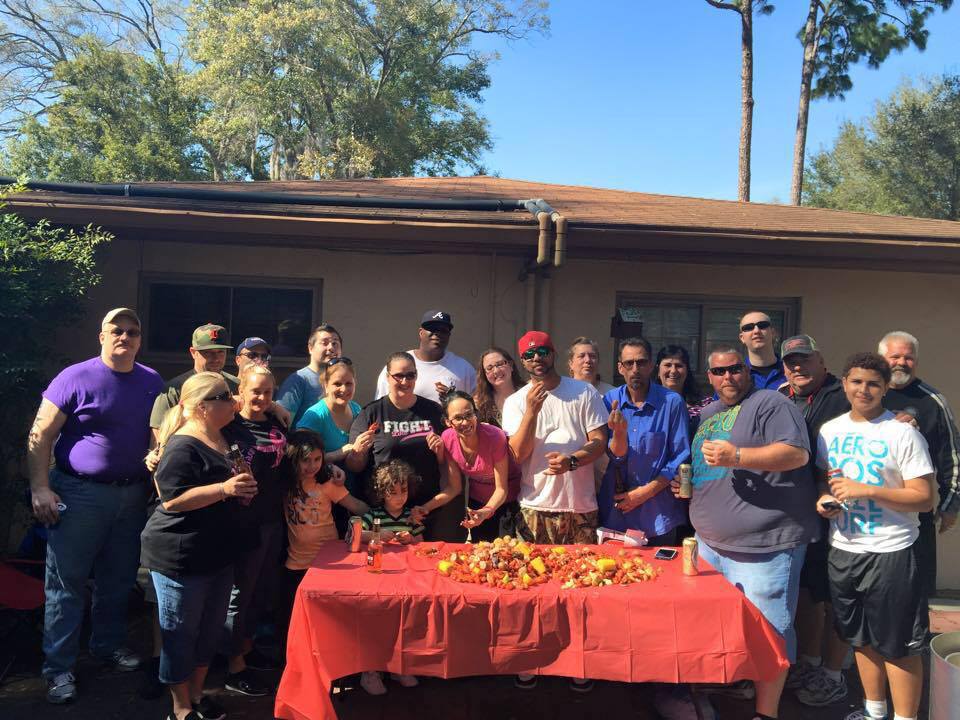